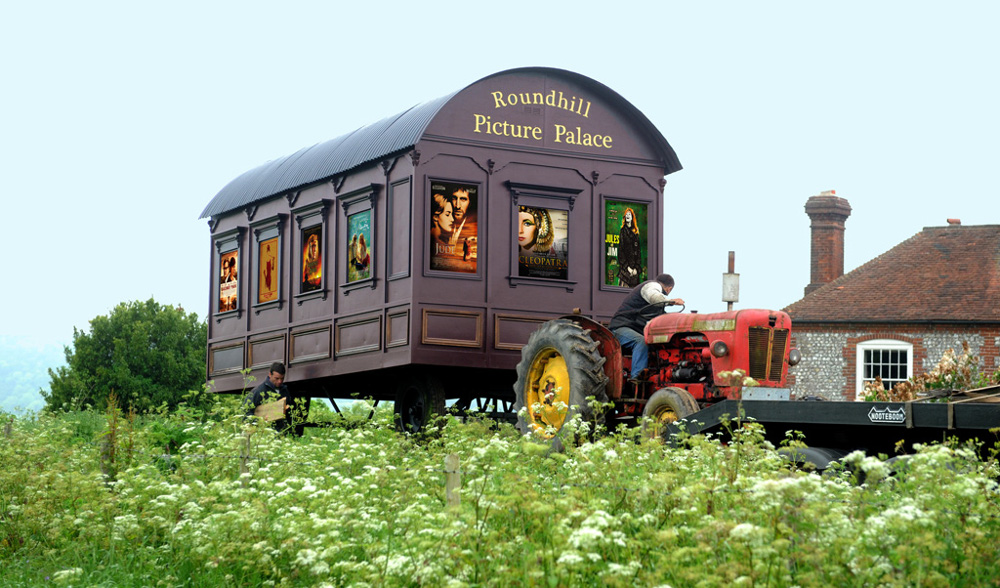 The Roundhill Picture Palace is Chichester’s newest hiring venue, located next to the New Park Film Centre, in New Park Road.
Watch your own DVD’s, Blu- rays , or use the USB port connection to the 65” screen in this beautiful unique setting, with thirteen seats, all staggered in height and with plenty of leg room.
Besides film shows, the Picture Palace is ideal for book readings, instrumental recitals, business presentations, shadow puppets, or historical talks, and anyone attending an event in it will have full access to the bar, food, and other facilities Centre.
It is one of the World’s smallest travelling picture houses now a permanent fixture at the New Park Centre. 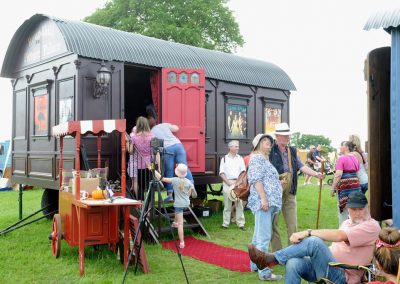 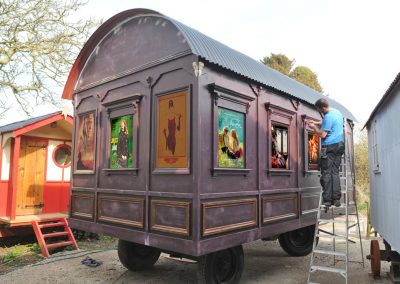 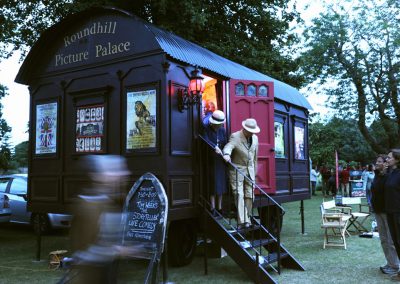 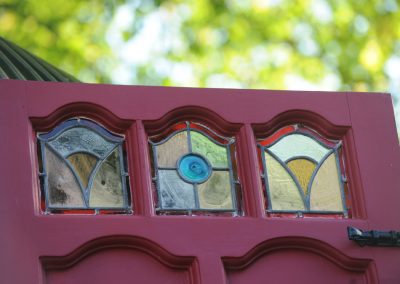 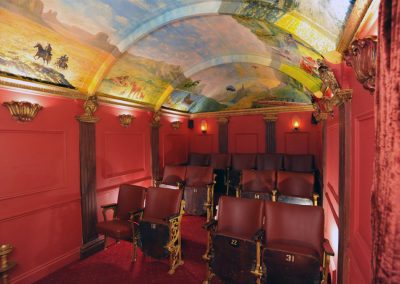 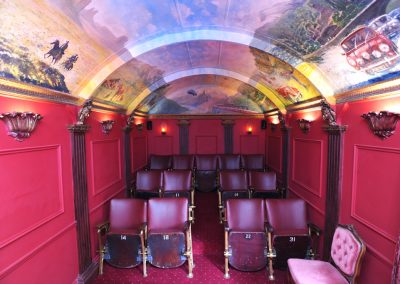 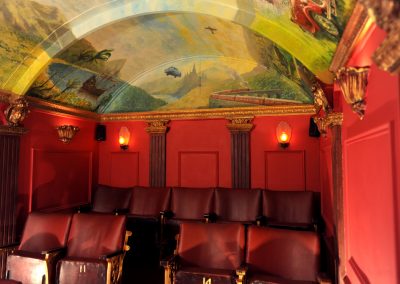 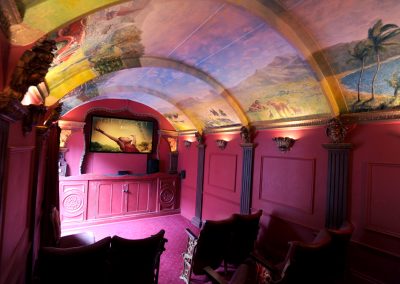 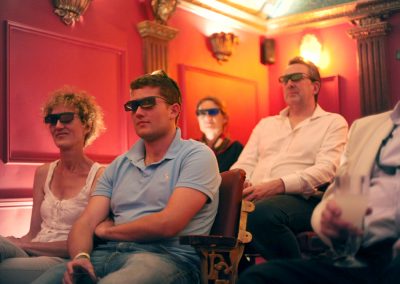 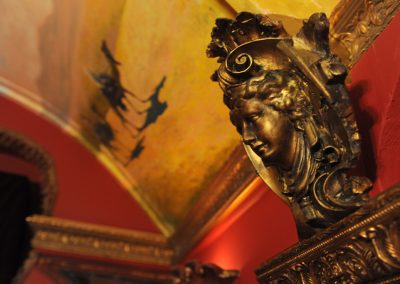 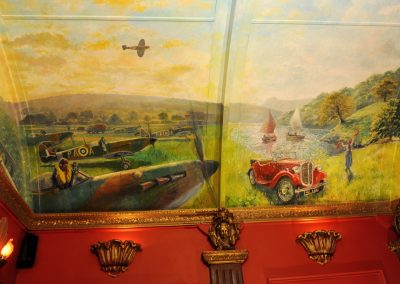 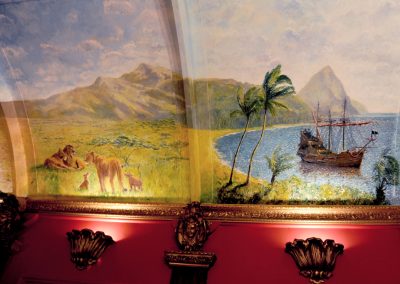 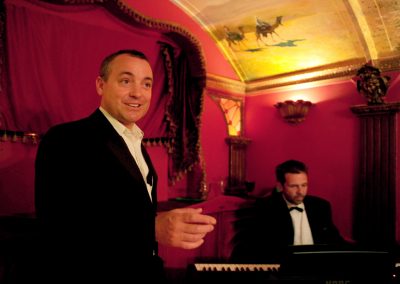 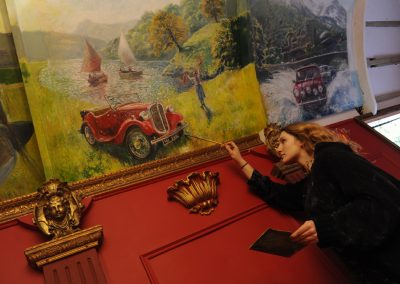 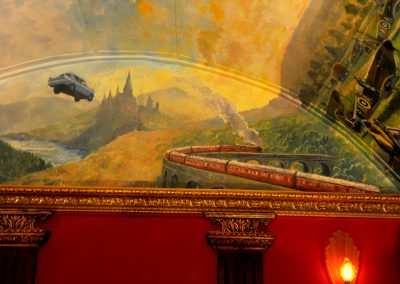 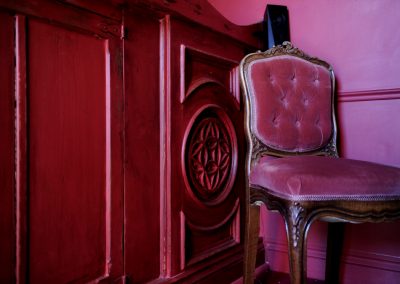 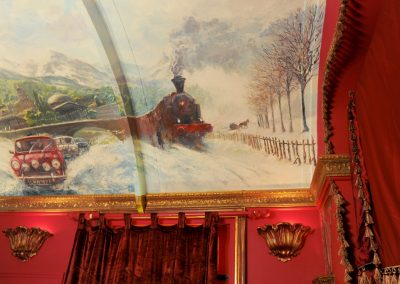 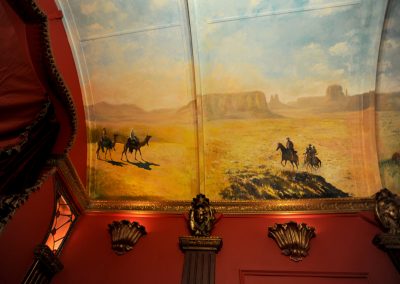 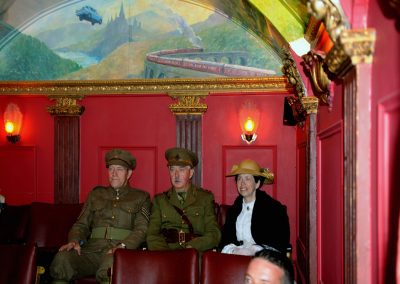 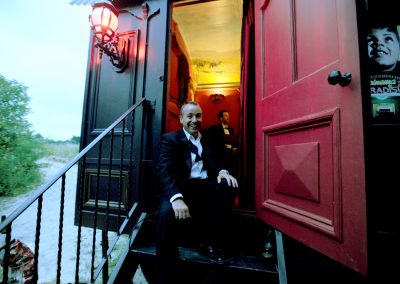 Roundhill Picture Palace. How it all evolved! Click here to Expand

I have been a full time press photographer for many years, and runningLouise Adams alongside this from 2010, my brother Paul, (an artist) and I build shepherd huts. (Roundhill Shepherd Huts) Whilst exhibiting these wagons at a show, my father and brother met a farmer who had an old 1950’s thresher machine axle and wheels which he wanted
to sell. So the next day he and my brother visited the farm and bought the massive frame, complete with four working wheels.
For just under a year it gathered dust and rust and looked pretty sad, but it had great potential.

I had watched a programe about a vintage mobile cinema from the 1960’s, which had been built by the British Government, and had been lovingly restored. I had also beeninspired by two dramas, one of which featured beautiful old Victorian shop fronts and the second, the film, Anna Karenina,
which had such a magical quality. I was enthralled by the theatre set designs.
A light bulb moment arrived – Why not build a wacky travelling picture palace in the style of an old Dickension shop exterior but with an interior echoing the style of an elegant theatre, or cinema, rich in colour, slightly faded, with gold gilted achitraving, pillars, angel faces and murals, opulent, cosy and intimate.

My brother was equally excited and shared my enthusiasm. He wanted to paint film scenes on the ceiling, and so every morning he would get up at 4am to paint in his shepherd hut studio. His paintings were in the style of the French Impressionists, including Lawrence of Arabia, The Searchers, Born Free, Pirates of the Carribean, Harry Potter, Battle of Britain, Swallows and Amazons, The Italian Job and Dr Zhivago. Mostley films from our childhood.

Mark, built the wagon. Not only has he an eye for detail, but he gets our company’s ethos (slightly eccentric), and he is now a valued team member who is also very passionate about the huts and his work.

The seats came from an old cinema in Dorset. I bought a 19th Century Italian head from a friend, Julie Mangan, who molded the face to make several others, a lot of gilt work was involved here! Art Deco lights and stained glass windows added to the effect as did some reclaimed doors and cupboards.

The cinema/theatre has up to 14 seats, all staggered in height and with plenty of leg room. It is truly one of the smallest travelling picture houses in the World.

Our “Picture Palace” is a beautiful little space that transports you to another era, and for a few hours, the outside world ceases to exist! 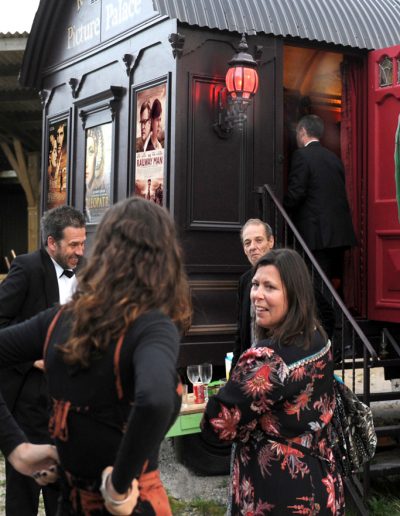 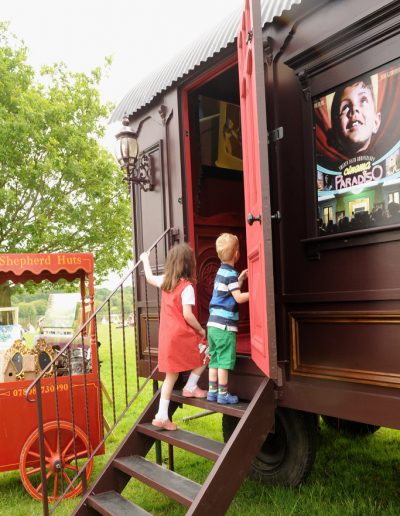 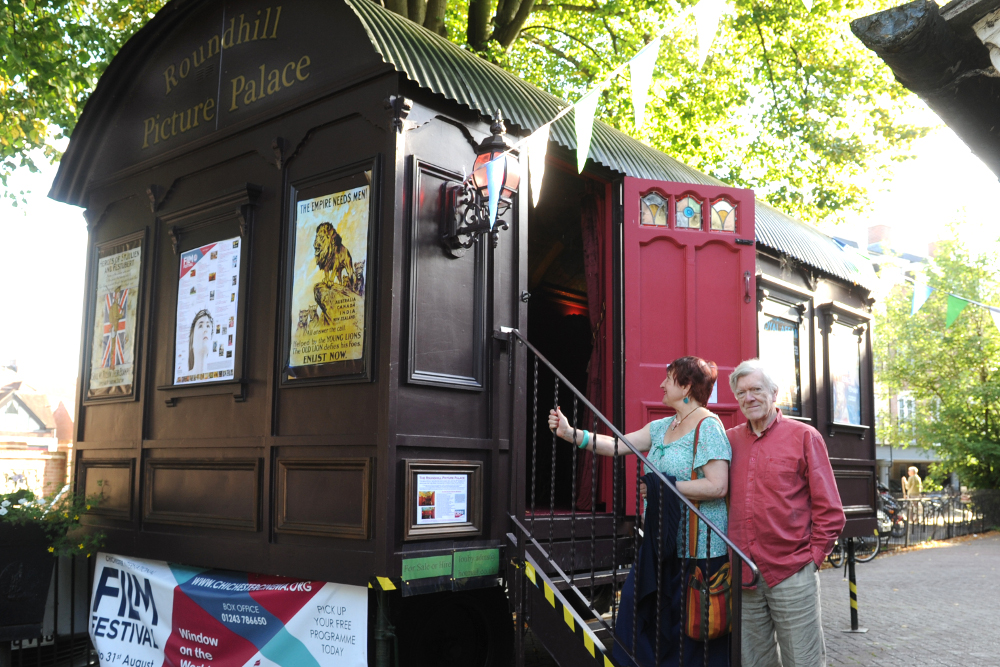 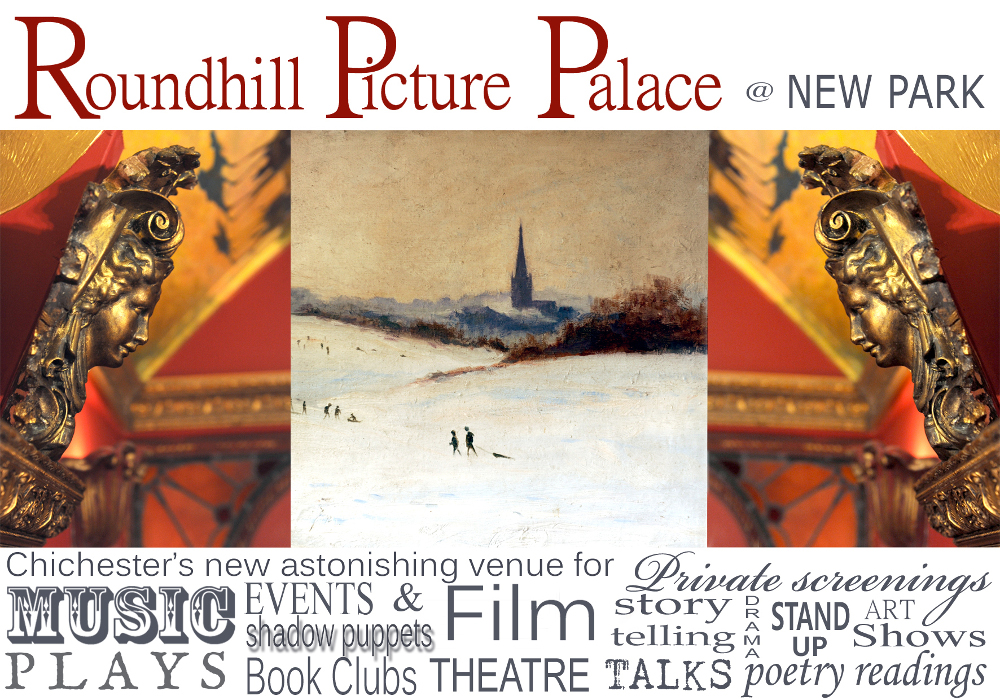 Information on the Picture Palace

The New Park Cinema is well established as the place to see independent, vintage or art house films in Chichester, but now anyone can commission a private screening of their favourite movie just for them and up to 12 friends.

Parked next to the main door at the New Park Centre, the Roundhill Picture Palace is a unique ‘Pocket Picturedrome’, inspired by the cinematograph shows that toured the country with travelling fairs in the early years of the last century. Looking from the outside like a large shepherd’s hut, the interior recreates the ambience of a 1930s Odeon with thick carpets, real cinema seats, fluted columns and cherub uplighters, framing an amazing series of paintings by Paul Adams. Covering the walls and ceiling, these pay homage to classic British films from Swallows and Amazons to Harry Potter, by way of Doctor Zhivago

The screening equipment, however, is state of the art, and can show anything from Charlie Chaplin silents to the latest Blu-ray 3D spectaculars. A usb port is attached to the 65” screen for personal presentations.

Besides film shows, the Picture Palace is ideal for poetry and book readings, instrumental recitals, shadow puppets, historical talks or business presentations, and anyone attending an event in it will have full access to the bar, food, and other facilities of New Park Centre.

For any information on the Picture Palace
please contact: 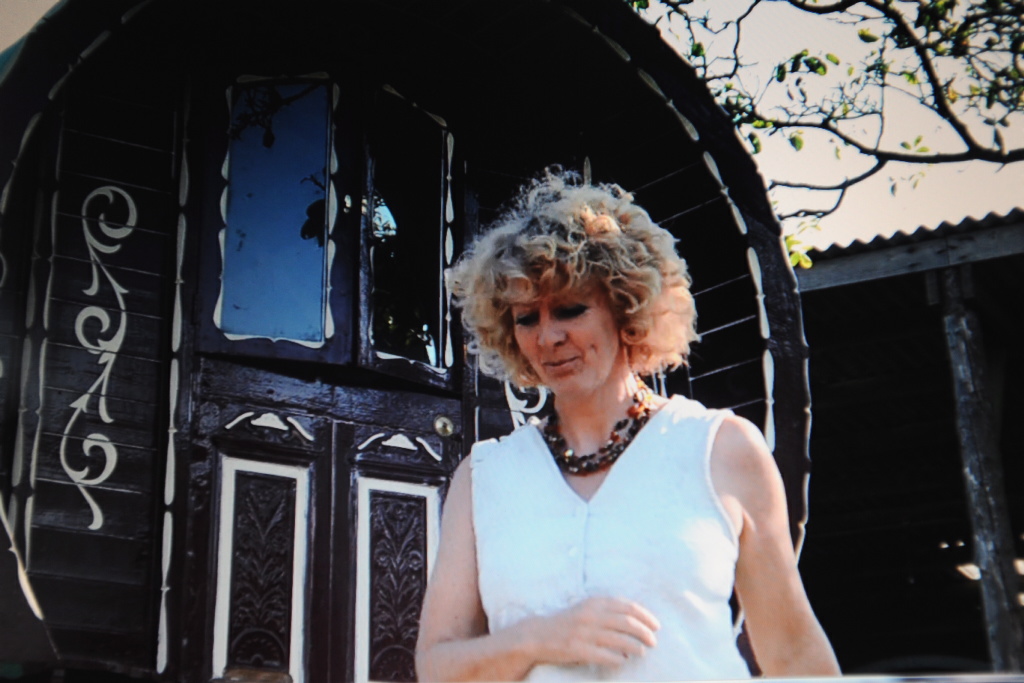